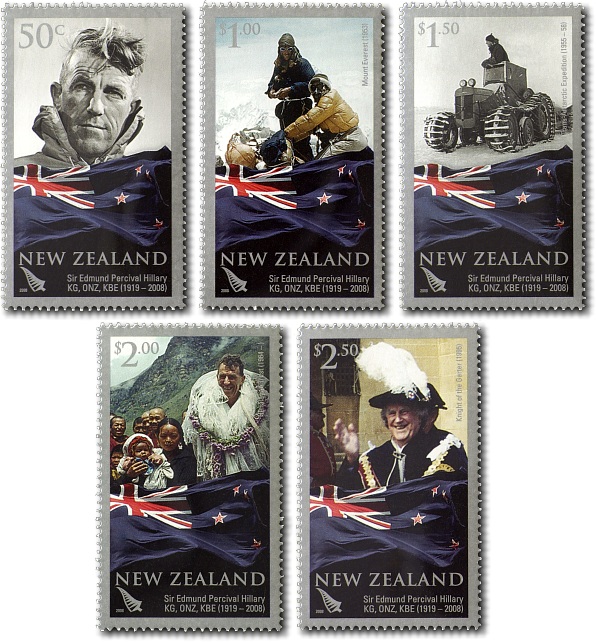 Sir Edmund Percival Hillary KG, ONZ, KBE (20th July 1919 - 11th January 2008) was a New Zealand mountaineer and explorer. On the 29th of May 1953 he and Sherpa mountaineer Tenzing Norgay became the first climbers known to have reached the summit of Mount Everest.

Hillary became interested in mountaineering while in secondary school, making his first major climb in 1939, reaching the summit of Mount Ollivier. He served in the RNZAF as a navigator during World War II. Before the successful expedition in 1953 to Everest, he had been part of a reconnaissance expedition to the mountain in 1951 and an unsuccessful attempt to climb Cho Oyu in 1952. As part of the Commonwealth Trans-Antarctic Expedition he reached the South Pole overland in 1958. He would later also travel to the North Pole.

His favoured New Zealand charity was the Sir Edmund Hillary Outdoor Pursuits Centre of New Zealand of which he was Patron for 35 years. Hillary was particularly keen on the work this organisation did in introducing young New Zealanders to the outdoors in a very similar way to his first experience of a school trip to Mt Ruapehu at the age of 16.

Hillary spoke of his disdain for the attitudes displayed by many modern mountaineers. In particular he publicly criticized New Zealander Mark Inglis and 40 other climbers who, in various groups, left British climber David Sharp to die in May 2006: "I think the whole attitude towards climbing Mount Everest has become rather horrifying. The people just want to get to the top. They don't give a damn for anybody else who may be in distress and it doesn't impress me at all that they leave someone lying under a rock to die."

Following his ascent of Everest he devoted much of his life to improving the conditions and lives of the Sherpa people of Nepal through the Himalayan Trust, a non-profit organisation which he founded in 1960. Over four decades the organisation has helped to establish over thirty schools, two hospitals and twelve medical clinics. He was the Honorary President of the American Himalayan Foundation, a United States non-profit body that helps improve the ecology and living conditions in the Himalayas.

The 50 cent, $1 and $2.50 stamps from this issue were included in the 2009 Timpex Stamp Exhibition miniature sheet with P14 perforation.
Bibliography
If you have any questions or comments please contact us - we'd love to hear from you.
Catalogue · 2007 · 2008 · 2009
Order Form · Currency Converter
Privacy Policy · What to Expect
Contact Us · Links