This issue commemorated the New Zealand International Exhibition of Arts and Industries which was held in North Hagley Park, Christchurch, between November 1906 and April 1907. It was the first set with large stamps to be designed, engraved and printed entirely within New Zealand.

This was also the first commemorative stamp set issued in New Zealand. The stamps were only on sale for the duration of the exhibition and could only be bought from the post office at the exhibition. One third of the revenue from stamp sale went to the organisers. 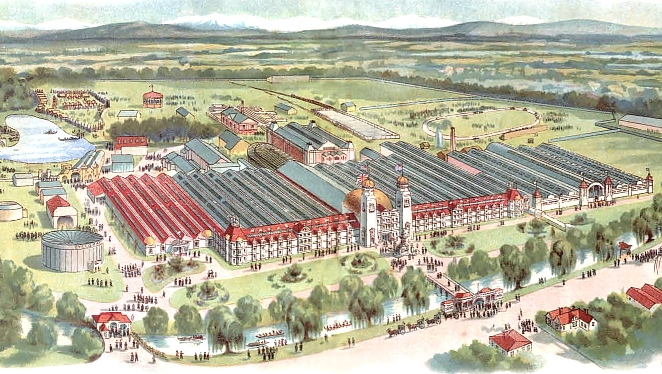 The Exhibition was government subsidised and no expense was spared. Large wooden buildings were constructed solely for the exhibition and were dismantled afterwards. The show was a huge success with close to two million people attending - roughly twice the population of New Zealand at that time.

The halfpenny green stamp depicts the arrival in Aotearoa of the Arawa canoe. Te Arawa is a confederation of Maori iwi and hapu (tribes and sub-tribes). The history of the Te Arawa people is inextricably linked to the Arawa canoe. In Maori tradition, Arawa was one of the great ocean-going, voyaging canoes that was used in the migrations that settled New Zealand. It was formed from a great tree in Rarotonga.

The one penny red stamp shows the prow of a Maori canoe being carved inside a Marae by a group of Maori craftsmen.

The dual colour three penny stamp stamp depicts the landing of Captain Cook on his first voyage to New Zealand at Poverty Bay on the east coast of the North Island on the 7th of October 1769. This first meeting led to the deaths of six local Maori during skirmishes with the crew, due to a misinterpretation of the traditional Maori challenge. Cook was unable to gain many of the provisions he and his crew needed at the bay, and for this reason gave it its name.

The dual colour six penny stamp depicts the annexation of New Zealand on the 30th of January 1840. Governor Hobson read his Proclamations which were the beginnings of the Treaty of Waitangi in the presence of a number of settlers and the Maori chief, Moka 'Kainga-mataa'. A document confirming what had happened was signed at this time by around forty witnesses; including Moka, the only Maori signatory.

There is considerable controversy over the one penny claret stamp. The exhibition organisers were not happy with the claret colour and ordered that the stamps be reprinted in a brighter red at their expense. The original stamps were destroyed except for one sheet which went to the Postmaster-General, one to exhibition organisers and 14 which were retained by the Post and Telegraph department. According to legend, one sheet got mixed up with the new stamps and was sold over the counter at the Post Office. Of course, the stamp is only of value to collectors if it was actually available for sale across the counter for postage. The Post Office accounts however do not record any sales of the claret stamp and while there are several mint copies of the stamp in circulation, the only used copies appear to have been cancelled five days after the exhibition post office had closed. Indeed, three of the stamps are on a cover addressed to the secretary of the exhibition committee.
If you have any questions or comments please contact us - we'd love to hear from you.
Catalogue · 1905 · 1906 · 1907
Order Form · Currency Converter
Privacy Policy · What to Expect
Contact Us · Links