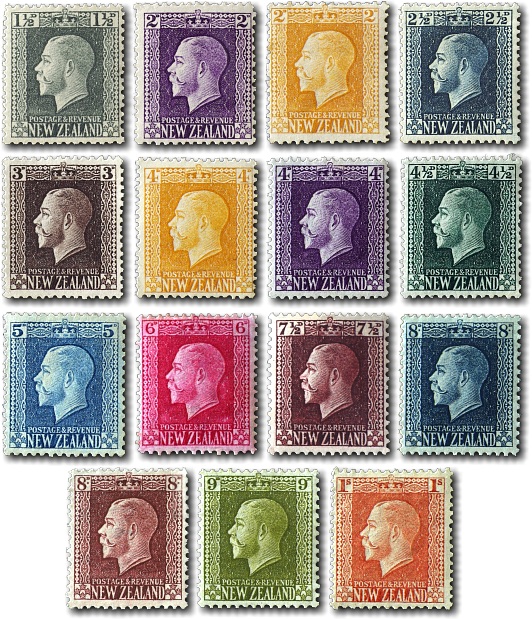 The King Edward VII stamps had only been on issue for six months when he died in 1910 and King George V ascended the throne. It was quickly decided that a new set of stamps should replace the Edward VII stamps, but it was five years before the new set was issued. There were various reasons for the five year delay - difficulty finding a designer, difficulty sourcing appropriate inks, and the perfectionist nature of the then Postmaster-General Sir Heaton Rhodes, himself a keen philatelist. Rhodes was keen to return to the simplicity of the 1855 Chalon Heads and the English 1840 penny black and twopence blue stamps.

The initial issue contained the 1½d, 2d violet, 2½d, 3d, 4d yellow, 4½d, 6d, 7½d, 9d and 1/- stamps. The 1½d, 4½d and 7½d stamps were new values introduced for parcel post and it was not thought necessary to have 5d and 8d values. All the careful planning came unstuck when a halfpenny tax was imposed on all mail other than newspapers during the First World War. As the new issue did not have 5d or 8d stamps, the Edward VII issue stamps continued in use until 1922 when 5d and 8d recess print stamps were finally introduced. However, within a week of issue of the 8d blue it was realised that the colour was too easily confused with the 2½d stamp, so the stamp was reprinted brown as the 7½d brown stamp had been withdrawn by that stage. This ought to have made the 8d blue stamp very rare, but pressure from stamp collectors forced the post office to continue selling the stamps.