In November 1958 another public design competition was announced for a new set of pictorial definitives. Entries were required in the form of line drawings as the selection panel had not decided on a printing method. In the end the selection panel chose photogravure and many of the designs lost significant detail or had to be altered to work with this process which is better suited to reproducing colour washes.

The ½d stamp features Manuka (from MÄori 'mÄnuka') (Leptospermum scoparium) - a shrub or small tree native to New Zealand and southeast Australia. It is found throughout New Zealand but is particularly common on the drier east coasts of the North Island and the South Island.

The 2d stamp features the Kakabeak (KÅwhai ngutukÄkÄ in MÄori) - a woody legume shrub native to the North Island, with striking clusters of red flowers resembling the beak of the KÄkÄ, a New Zealand parrot. The species is endangered in the wild, with only 153 trees found in a 2005 survey. Although widely grown as a garden plant, the cultivated lines are descended from only a few plants and are not genetically diverse.

The 2½d stamp which was issued later in 1960 features TÄ«toki (Alectryon excelsus) - a shiny-leaved native tree that thrives in coastal and lowland forests. The tree flowers in spring and the seeds take up to a year to mature. In common with most New Zealand natives, the MÄori vernacular name is now preferred for English use. It was formerly known as the 'New Zealand Ash'.

The 3d stamp features the Kowhai (Sophora microphylla) - a small woody native tree that grows throughout the country and are a common feature in New Zealand gardens. They have horn-shaped yellow flowers, which appear in early spring. Their nectar is a favourite food for Tui, Bellbird and KererÅ« (New Zealand Wood Pigeon).

The 4d stamp features Puarangi (Hibiscus trionum) - the smaller of the two New Zealand hibiscus. The plant grows to a height of 20-50 cm, and has yellow flowers with a purple centre.

The 5d stamp features the Mountain Daisy (matua-tikumu). Tikumu are large-leaved mountain daisies in the genus Celmisia that are widespread and abundant in New Zealand mountain grasslands.

The 6d stamp features Pikiarero (Clematis paniculata) which is a common flowering climber in most lowland forest areas throughout New Zealand.

The 7d stamp which was not issued until 1966, features Koromiko (Hebe salicifolia) - a native shrub which was used by MÄori for medicinal purposes.

The 8d stamp features the flower of the RÄtÄ. The Northern rÄtÄ (Metrosideros robusta), is a huge forest tree which grows up to 25 meters tall. It usually begins as an epiphyte high in the branches of a mature forest tree. Over centuries the young tree sends descending and girdling roots down and around the trunk of its host, eventually fusing to form a massive and frequently hollow pseudotrunk. In disturbed ground, or where there are gaps in the forest cover, Northern rÄtÄ will grow on the ground with a normal but short trunk. Southern rÄtÄ (Metrosideros umbellata) grows up to 15 meters tall with a trunk up to 1 meter in diameter. It produces masses of red flowers in summer. Unlike its Northern relative, this species rarely grows as an epiphyte.

The lowest stamp values were perforated with an experimental comb perforation machine which perforated columns half way above and below the horizontal perforation. As seen in the above example, if the machine is incorrectly adjusted this results in either a very narrow or very wide perforation tooth in the centre of the vertical perforations on each stamp. 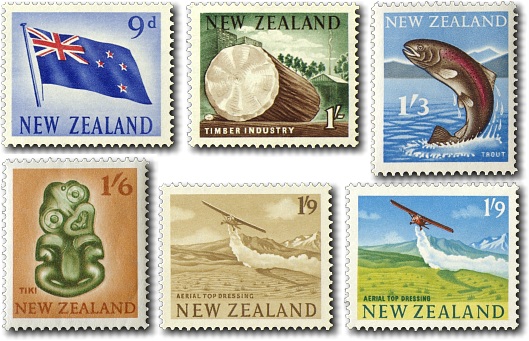 The 9d stamp features the New Zealand Flag in true colours and was designed by the Post Office Publicity Department.

The 1 shilling stamp was commissioned by the New Zealand Timber Merchant Federation and shows a Kauri log being milled. The Kauri tree is very slow growing and was greatly prized for it's straight grain. Unfortunately, there are very few left standing now. Recent governments have focused on the preservation of native forests.

The 1/3 stamp features a Rainbow Trout. Trout fishing is a major tourist attraction.

The 1/6 stamp features a pounamu (greenstone) Hei-tiki which is worn around the neck. They are often incorrectly referred to as tiki, a term that actually refers to large human figures carved in wood, and, also, the small wooden carvings used to mark sacred places. New Zealand greenstone consists of either nephrite (a type of jade, in MÄori: pounamu) or bowenite (MÄori: tangiwai). Pounamu is esteemed highly by MÄori for its beauty, toughness and great hardness.

The 1/9 stamp shows an aerial topdressing plane spreading fertilizer over farmland or spraying noxious weeds. The use of aerial topdressing has reduced in recent years due to tighter restrictions controlling drift of chemicals onto neighbouring properties.

In November 1963, a colour version of the topdressing stamp was issued which replaced the original sepia toned stamp.

The 2 shilling stamp features a drawing of a Taniwha from a limestone cave shelter overlooking the Opihi River in South Canterbury. In MÄori mythology, taniwha are beings that live in deep pools in rivers, dark caves, or in the sea, especially in places with dangerous currents or deceptive breakers. The taniwha has analogues that also appear in other Polynesian cosmologies.

The 2/6 stamp features commercial butter production. At the time of issue, over three quarters of the butter produced in New Zealand was exported overseas, and dairy exports are still a major contributor to New Zealand's economy.

The 3 shilling stamp features Tongariro National Park and the Chateau. Tongariro National Park, located in the central North Island, is the oldest national park in New Zealand and was the fourth National Park established in the world. The active volcanic mountains Ruapehu, Ngauruhoe, and Tongariro are located in the centre of the park. There are a number of MÄori religious sites within the park, such as the grave of Te Heuheu Herekeikei and the summits of Tongariro, Ngauruhoe and Ruapehu are tapu (sacred). The Chateau (now called Bayview Chateau Tongariro) was completed in 1929 and despite extensive refurbishment still retains much of the style of the pre-Depression era.

In April 1964, a colour version of the Tongariro National Park stamp was issued which replaced the original grey toned stamp.

The 10 shilling stamp features Tasman Glacier, the largest of several glaciers which flow south and east towards the Mackenzie Basin from the Southern Alps in the South Island. The glacier has been in retreat for many years and it is predicted to disappear completely within the next 10-19 years.

The 1 pound stamp features the Pohutu Geyser. Whakarewarewa (a geothermal area within Rotorua city) has around 500 pools and 65 geyser vents. Seven geysers are currently active. The most famous, Pohutu Geyser, meaning big splash or explosion, can erupt up to 30 meters usually every hour.

In 1967 the majority of these stamps were reissued with Decimal Currency values. These stamps are listed separately under 1967 Decimal Pictorials.
If you have any questions or comments please contact us - we'd love to hear from you.
Catalogue · 1959 · 1960 · 1961
Order Form · Currency Converter
Privacy Policy · What to Expect
Contact Us · Links