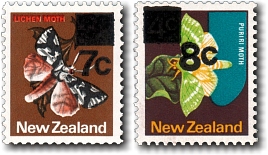 With the introduction of the 1975 Pictorials / Definitives stamp issue, the Post Office found that the new stamps were too large to fit in automatic stamp-affixing machines - such as the Postafix machine by Data Link Co, California.

The 1978 Coil Stamps solved this problem, but as an interim solution, supplies of the 1970 Definitives / Pictorials 3 cent and 4 cent moth stamps were overprinted by the Government Printing Office with 7 cent and 8 cent denominations and made up into rolls of 400 stamps.

Some very crude forgeries of the 7 cent overprint were discovered by stamp collectors shortly after this issue was released - the intention apparently being to defraud the New Zealand Post Office of four cents revenue rather than fool collectors. They can be easily identified as the '7' surcharge is considerably smaller than on the valid stamp and the ink is dull compared to the gloss of the Post Office issue.
Bibliography
If you have any questions or comments please contact us - we'd love to hear from you.
Catalogue · 1976 · 1977 · 1978
Order Form · Currency Converter
Privacy Policy · What to Expect
Contact Us · Links